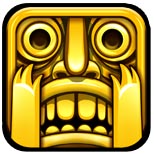 Publishing will kick off in all three territories this August, with the first two titles in a brand-new fiction series, Run for Your Life. The UK and US will also publish an activity title in August and the UK will publish two more titles in the fiction series in November, which the US and Australia will release in early 2015.

Egmont’s Run For Your Life multiple storyline fiction series is full of obstacles, threats and decisions to make. The first two titles in the series will be Jungle Trek and Doom Lagoon, and feature fans’ favourite characters from the game, including Guy Dangerous and Scarlett Fox.

“Playing Temple Run is an exhilarating experience, and our formats and content are as cool, fast-paced and exciting as the game itself. Our publishing offers a fantastic opportunity for fans to delve deeper into the world and characters of Temple Run. We’re thrilled that Temple Run will feature in our new ‘Downloaded’ activity book range and we’ve already had an amazing response to our Run for Your Life fiction series, which is perfect for readers aged seven plus. We couldn’t think of a better format for the Temple Run game than putting all the choices in the readers’ hands.”

“We’re delighted to have Egmont on board as master publisher. Their book content absolutely reflects the excitement of the game and will allow fans to further immerse themselves in to this epic endless runner story.”