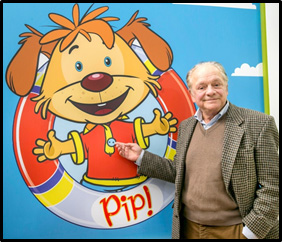 Lisle International was delighted to welcome the British renowned legend along with CHF Entertainment’s managing director, Simon Hall to their stand as part of the launch of the new pre-school property and animated TV series – Pip!

Sir David took part in photo opportunities and gave various interviews about his role in Pip! attracting a lot of attention from both visitors and press.

“I believe that Pip!’s fantastic world of playful friends and fun packed adventures has incredible appeal. We are therefore thrilled to be working with esteemed licensing agency, Lisle International which is widely recognised as one of the foremost licensing and merchandising brands in our industry.”

The brand new Pip! animated series, launches in the autumn of 2014 and will follow the adventures of Pip!, the mischievous pup and his friends in the seaside town of Salty Cove. It was announced earlier this year that Sir David Jason, non-executive director at CHF Entertainment will be narrating the voice of Pip!’s friend, Skipper.

“The day was a great success and it was hugely exciting to have such a prestigious star working alongside us. It was the perfect way to launch Pip!, a licence that we believe will take 2014 by storm.”

For more information about Pip!, contact Gayle Tarrant at Lisle by emailing Gayle@lislelicensing.com