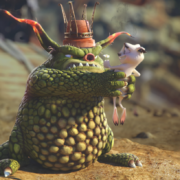 Bottersnikes & Gumbles was presented internationally at MIPJunior last month where it was extremely well received by buyers, becoming the second most viewed programme at the screenings. In addition, the CGI comedy series was awarded the 2016 Promax BDA Silver Award for ‘Best Program Title Sequence’ as well as receiving a further two nominations for ‘Best Music for Children’s Television’ at the 2016 Screen Music Awards and ‘Best Children’s Television Series’ at the 2016 AACTA Awards, both of which will be announced in November and December respectively. Earlier this year, Bottersnikes & Gumbles won the 2016 Pulcinella Award for ‘Best Kids TV Series’ at Cartoons on the Bay and the 2016 Gold AEAF Award for ‘Best Opening Titles’ as well as a nomination for ‘Most Outstanding Children’s Programme’ at the 2016 Logie Awards.