Simba, The Entertainer and Animaccord team up for retail campaign

Animaccord, the rights holder of the worldwide hit animated family show, Masha and the Bear, together with one of the largest UK toy retailers, The Entertainer, will partner together to carry out an exciting spring retail campaign, which will start on the March 22nd and to the April 25th During the campaign, The Entertainer’s shops will be set up with the fabulous branded Masha and the Bear’s POS displays, featuring the hilarious characters creating a fun environment, which will be supported by interactive Meet & Greet events with the Masha costume character allowing children to meet their favourite mischievous hero.

The campaign will also feature various online activities such as social media contests with prizes from Animaccord partner, Simba Smoby Toys. The previous joint campaign with The Entertainer, which ran in Autumn of last year, almost tripled the sales of Masha and the Bear toys from the Simba Dickie Group in the EMEA region.

Lianne Barber, Senior Marketing and Licensing Manager of The Entertainer: “The Entertainer is pleased to have the opportunity to focus on Masha and The Bear again for a four week campaign. Last time the results more than exceeded our expectations and we look forward to seeing similar results for this campaign” Richard Belford, Sales Director of Simba Smoby Toys adds: “The Entertainer has been a key retail partner and supporter of the Masha and The Bear toys range since launch in 2016 and is a real destination for Masha fans.

This two part joint campaign will really create a sense of retail-theatre at Entertainer stores, which will drive sell through of the toys and new lines in Q4 2018. Masha and the Bear is proving to be a big hit in the UK on Sony Pictures Television Networks’ pre-school channel, Tiny Pop (Freeview 207, Sky 617, Freesat 605 and Virgin 737).

The show debuted on Tiny Pop last December and is now a top-rating show, with viewing figure growing steadily. The show airs each weekday at 07:00 and 17:00, and at weekends at 07:00, 11:30 and 17:30. Netflix, Cartoonito and Boomerang also show Masha and the Bear in the UK.

New York, NY – March 15, 2018 – HISTORY announces “Evel Live,” an unprecedented three-hour live event created in partnership with Nitro Circus Media Productions, premiering Sunday, July 8 at 8PM ET as part of the network’s second annual car week. During “Evel Live” American professional motorsports icon Travis Pastrana will honor legendary daredevil Evel Knievel by attempting three of his most dangerous feats in Las Vegas, Nevada, all while riding a modern day recreation inspired by the motorcycle Knievel used. These include: breaking Knievel’s record jump over 50 cars, another record-breaking jump over 14 full size buses, and aiming to make history as the first person to successfully jump the Caesar’s Palace fountain on a bike similar to the one Knievel used 50 years ago – an attempt that ended with a crash that left him grasping for life. If Pastrana rides away from all three, he will be the only person to successfully beat two of Knievel’s distance records and land a jump over the fountain on a v-twin motorcycle. All of this will happen in the span of just three hours, and HISTORY will capture every exhilarating, nerve-wracking moment live.

“Death-defying feats have fascinated audiences for centuries and Evel was one of the most iconic daredevils in history whose drive, determination and boldness inspired America,” said Eli Lehrer, Executive Vice President of Programming, HISTORY. “50 years after Evel went head-to-head with danger at Caesar’s Palace, Travis will attempt to catapult his most ambitious stunts to unthinkable heights. This extraordinary live event will certainly be history in the making.”

“’Evel Live’ is a passion project we have been working on for a long time now with Travis,” said Andy Edwards, President of Nitro Circus. “We are so excited for viewers to see this thrilling event live on HISTORY as the centerpiece of car week.”

Alongside the three epic jumps will be live interviews with Knievel and Pastrana family members, archival footage of the history behind Knievel’s many daring jumps, and expert analysis. Evel Knievel was the world’s first iconic daredevil. Spanning a career of 15 years that saw 75 spectacular motorcycle jumps – and a few harrowing accidents – Knievel created a legacy that inspired generations and left audiences in awe of his audacious feats. Fast forward to the present day and Pastrana has stepped into Knievel’s shoes as America’s modern-day daredevil. Inspired by his predecessor, Pastrana was the first person ever to land a double backflip on a motorcycle and now leads Nitro Circus’ team of skilled athletes and adrenaline-charged thrill-seekers, which for 15 years have thrilled millions worldwide with their daring exploits.
“Evel Live” is produced by Nitro Circus Media Productions. Trip Taylor and Dave Mateus are executive producers for Nitro Circus Media Productions. Zachary Behr, Sean Boyle and Mary Donahue are executive producers for HISTORY.
About HISTORY®
HISTORY®, now reaching more than 96 million homes, is the leading destination for award-winning series and specials that connect viewers with history in an informative, immersive and entertaining manner across all platforms. The network’s all-original programming slate features a roster of signature series including The Curse of Oak Island, Forged in Fire, Alone, Pawn Stars, American Pickers, as well as the hit drama series Vikings and SIX. The HISTORY website is located at history.com. Follow us on Twitter at twitter.com/history and Facebook at facebook.com/history. For more press information and photography, please visit us at http://press.aenetworks.com.

About Nitro Circus
Nitro Circus, the world’s biggest action sports entertainment brand, creates electrifying live events and unbelievable original content that at once exhilarates, captivates and inspires thrill-seeking fans worldwide. Co-founded by global superstar Travis Pastrana in 2003, Nitro Circus has since grown into a multiplatform phenomenon producing hit television shows, critically acclaimed documentaries and innovative digital offerings. That success gave rise to the Nitro Circus Live tour. Created in 2010, Nitro Circus Live has travelled the globe, playing to sold-out stadiums on five continents. The company introduced an innovative breakthrough in 2016 with the debut of Nitro World Games, completely rebooting action sports competition in the process. With over three million tickets sold to date, television programming that has aired in over 60 countries, more than 20 million engaged fans across its social media platforms and a burgeoning consumer products business, Nitro Circus is at the forefront of action sports and entertainment. For more information visit nitrocircus.com.

Magic Box Toys International is celebrating the outstanding launch success of brand new collectible range SuperZings: Rivals of Kaboom following a strategic 360-degree communications campaign which resulted in sales of more than half a million units within the first four weeks.

The primary school initiative – SuperZings Show & Tell Super Heroes – was designed for Year One classes specifically to turn the popular “Show & Tell” classroom moment into a much bigger and more engaging experience for five- and six-year olds across the UK. An initial wave of 200 schools received a free pack containing an expert guide for teachers to get the most out of children using Show & Tell, as well as posters, stickers, a specially-created SuperZings Show & Tell Superhero cape and eye mask as well as 20,000 blind bags for children to take home.

In addition, Magic Box went ‘back to school’ and spent the day with children filming a ‘kids say the funniest things’-style video series for use on social media, UKMums.tv and YouTube. The series saw children answer questions such as “Who’s your real-life superhero?” and “If you had a superpower, what would it be?”, with some hilarious responses. The video series has already been viewed more than 25,000 times on Magic Box’s Facebook page alone.

To align the brand with parents and to generate talking points around the launch, a news generation poll of children aged 4-6 years and their parents investigated their opinions on real-life superheroes – enabling extensive media coverage of the themes associated with SuperZings. The news story generated a reach of over 1 million as well as over 200 pieces of coverage including Mail Online and The Huffington Post.

The two-week take-over of UKMums.tv included SuperZings homepage graphics and dedicated page content such as SuperZings Webisodes, 12 blogger reviews, competitions and social media exposure which led to a reach of over 1.3 million. In the second week of the site take-over, Magic Box hosted an hour-long Twitter Party led by five top parenting bloggers in partnership with SuperZings’ retailer, The Entertainer. The Party engaged almost 200 contributors and achieved 3.6 million impressions during the hour. The combined social media activity has seen follower numbers surge across all Magic Box’s channels, has successfully raised awareness of the new collection and has driven sales at retail.

Children have also been getting their hands on SuperZings through extensive sampling within Gulliver’s theme parks and various soft play centres across the country. As well as receiving a SuperZings blind bag with each children’s ticket purchase, Gulliver’s is also including SuperZings in their birthday party goody bags.

Working with key children’s media, Magic Box also embarked on a cover-mounting exercise with titles such as Toxic, Kraze and Busy Time combined with activity pages and competitions. In addition, TV Advertising ran throughout the period across all terrestrial and satellite kids channels achieving over 1250 TVRs.

Commenting on the campaign, Ben Harper of Magic Box Toys said, “We are thrilled by the positive impact the launch has had for SuperZings. Working closely with Playtime PR, our objective was to get SuperZings out there in the hands of parents and children in meaningful and engaging ways, so that we could ultimately create devoted collectors. This was crucial in generating the buzz around launch and the campaign has generated engaging, interactive and exciting content which can be used across multiple media platforms.” 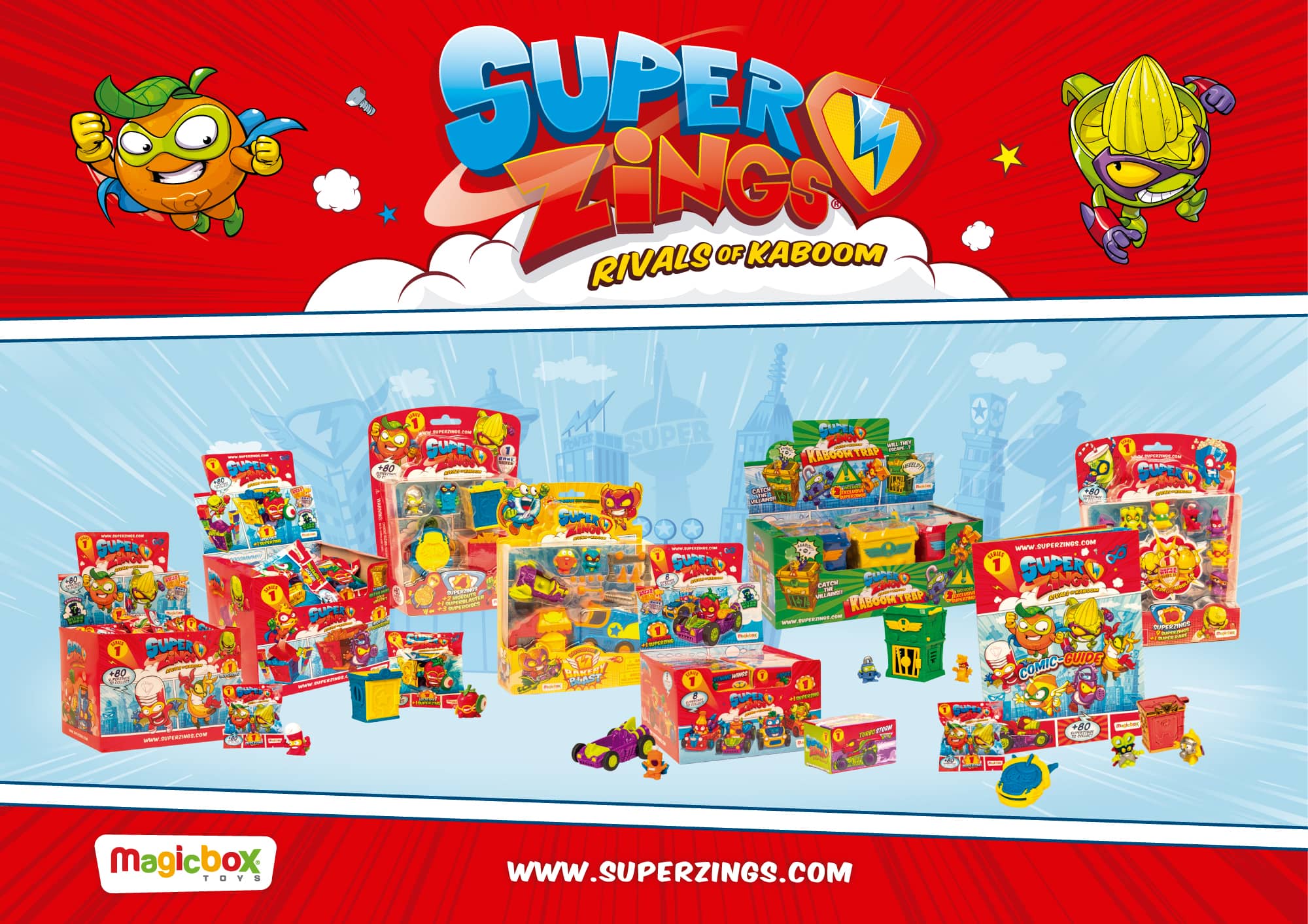