Simba, The Entertainer and Animaccord team up for retail campaign

Animaccord, the rights holder of the worldwide hit animated family show, Masha and the Bear, together with one of the largest UK toy retailers, The Entertainer, will partner together to carry out an exciting spring retail campaign, which will start on the March 22nd and to the April 25th During the campaign, The Entertainer’s shops will be set up with the fabulous branded Masha and the Bear’s POS displays, featuring the hilarious characters creating a fun environment, which will be supported by interactive Meet & Greet events with the Masha costume character allowing children to meet their favourite mischievous hero.

The campaign will also feature various online activities such as social media contests with prizes from Animaccord partner, Simba Smoby Toys. The previous joint campaign with The Entertainer, which ran in Autumn of last year, almost tripled the sales of Masha and the Bear toys from the Simba Dickie Group in the EMEA region.

Lianne Barber, Senior Marketing and Licensing Manager of The Entertainer: “The Entertainer is pleased to have the opportunity to focus on Masha and The Bear again for a four week campaign. Last time the results more than exceeded our expectations and we look forward to seeing similar results for this campaign” Richard Belford, Sales Director of Simba Smoby Toys adds: “The Entertainer has been a key retail partner and supporter of the Masha and The Bear toys range since launch in 2016 and is a real destination for Masha fans.

This two part joint campaign will really create a sense of retail-theatre at Entertainer stores, which will drive sell through of the toys and new lines in Q4 2018. Masha and the Bear is proving to be a big hit in the UK on Sony Pictures Television Networks’ pre-school channel, Tiny Pop (Freeview 207, Sky 617, Freesat 605 and Virgin 737).

The show debuted on Tiny Pop last December and is now a top-rating show, with viewing figure growing steadily. The show airs each weekday at 07:00 and 17:00, and at weekends at 07:00, 11:30 and 17:30. Netflix, Cartoonito and Boomerang also show Masha and the Bear in the UK. 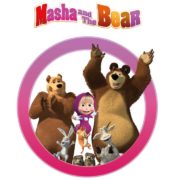 Ink Global has announced that Sambro will produce Masha and the Bear merchandise for the UK market, after signing a deal brokered by Lisle International Licensing.

The hilarious animated hit chronicles the adventure of Masha – a lovable but endlessly inquisitive little girl – and her reluctant best friend, a circus bear whose love of the quiet life is repeatedly thwarted by Masha’s attentions. Ink Global represents the property globally in the broadcasting and licensing sectors, while Lisle International Licensing is the brand’s UK representative.

END_OF_DOCUMENT_TOKEN_TO_BE_REPLACED

Brand licensing agency Ink is delighted to announce that Lisle International has been appointed to lead the UK licence programme for European hot property Masha and The Bear™.

Masha and The Bear™ is already a successful enterprise across Europe, where the adventures of the cute seven year old little girl called Masha with her friend and reluctant caregiver The Bear is already a firm favourite. Played out in short episodes of award winning CGI, the storyline creates a hilarious sitcom that is adored by the core audience of 3 to 6 year olds and parents alike. The success of the shows has seen the creation of a licensing powerhouse with 40+ active licensees across Europe and over 400 Masha inspired products in the market place.